To most people in the 21st century, batteries are simply a convenient substitute if mains electricity is impractical or unavailable. But when the battery was invented in 1800 it was the first device capable of providing an electric current. 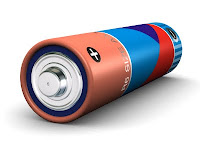 Alessandro Volta (Italy) was an eminent physicist who made a number of significant breakthroughs in the field of electricity and is commemorated by the use of his name for the electrical unit of potential difference, the volt. His most famous invention, the battery, came about as the result of a disagreement with another Italian scientist, Luigi Galvani.

In 1775 Volta invented a 'perpetual electrophorus': an early form of electrical induction machine that could be used to generate and store static electricity. It worked by rubbing cat fur across a rubber-coated metal plate to build up a static charge, and then transferring the charge to a Leyden jar; by repeating the process several times a large charge could be built up. (The Leyden jar was invented in 1745 at the university of Leyden, Netherlands, as a means of storing electric charge.) Static electricity and the Leyden jar were nothing new, but what Volta had invented was a means of accumulating an electric charge.

Volta's real breakthrough, however, came when he heard about the electrical experiments of anatomist Galvani. Galvani had noticed that dissected frogs' legs would twitch if they were part of a circuit involving two metals, and concluded that the muscles and nerves were the source of what he called 'animal electricity'. Volta disagreed, thinking that the current was more likely to be due to the connection between the two metals; he began experimenting with pairs of metals and discovered that he could generate an electric current if certain metals were submerged in acid. The result, in 1800, was Volta's greatest invention, the 'voltaic pile'. It was the world's first battery - a series of copper and zinc strips submerged in salt water that could provide an electric current rather that mere status electricity. The following year, Napoleon I (ruler of Italy since its conquest by France in 1796) bestowed the Legion of Honour on Volta, in recognition of the importance of his invention, and made him a Count.
Posted by Unknown at 6:25 PM